Today we are proud to showcase our newest mechanic: the air dive. This was a tough one but we are really proud of the results. This mechanic is a great example of collaboration from design to programming, animation and special effects.

The air dive is a style attack that all Samurai will be able to do while they are in mid air. Considered a high risk, high reward attack, you can target an area in a radius around you and dive to that location dealing area of effect (AOE) damage to any enemies hit. To balance this attack, there are rules. For example, you need to reach a certain height in the air to get biggest AOE. The ability must charge for a second before being able to dive. You can only air dive once while in the air. The air dive damage is dynamic, meaning it deals different two different damage models depending on how high you were in the air compared to the impacted area. For best results, try directly ramming into an enemy while high up in the air. Enemies hit by this attack are also knocked back a little bit. This is still early on in development so balance and damage models are still being adjusted.

Last month we introduced the core combat mechanics of Samurai Zero and this month we have expanded on them and did a little bit of polish. Last month was a really rough like good lord this is just terrible...but today, its starting to really come together.

Combat feel is crucial for games so this past month we went all out. To start, we have brand new VFX added to the game's combat. Sword Trails, impact particle effects and placeholder sounds are now all in the game enhancing the feedback you get when hitting someone.

We also added some special sauce in the form of screen shake and the hidden ingredient many fighting games have...hit stop to really drive the combat further.

'Hitstop' is basically when the game freezes the characters at the point of collision during an attack. While it sounds crazy its one of those things that you feel when its missing but don't even notice when its there. This sell the collision's impact and helps both players' eyes register and confirm the attack landed. Just seeing the before and after speaks volumes.

Speaking of visualization of combat we also did another polish pass of our deflection system. Now with deflected animations for the defender, placeholder sounds and some dope special effects, even deflecting really pops now.... I could do this all day.

We also finished setting up the foundation of the broken system for our game. We teased in the last devlog that when a player's resolve hit empty they became broken. Now, as you can see it is visualized causing the broken character to take a knee for a couple seconds. Being broken is a heavy consequence so we are working on the final part of this mechanic, where players can actually execute any enemy who is broken with a dope execution animation.

Basically we are gonna let ya get a little toxic and dunk on enemies. Nothing wrong with a little bit of disrespect. Expect in a future update what this will look like fully played out. We would love to hear you guys sound off in the comments and give suggestions as to what type of execution move you would like to see Ryder do. Let us know. 😃

Now on to some really nice quality of life changes. The combat system now has a switch input allowing you to switch combat styles effortlessly between light to heavy attacks. You may find it very similar to that which is found in Jedi Academy. Once we get our updated heavy attack animations, we will plug them into our combat engine and start to see it all string together.

You may have also noticed we did some animation improvements to Ryder and have overhauled our double jump movement system. Previously it felt too basic and restrictive.  Now Ryder's movement has more personality hitting on the theme of the acrobatic fighter. He loves to flip and now with brand new directional animations you can flip to your heart's content. I can say without a doubt, we are starting to see the fun explode out of all our mechanics now in full unison.

This devlog video wouldn't have been possible without the support of our Patreon, who make these devlogs possible.  If you would like to support the development of Samurai Zero and see even more additional content not yet shown to the public, consider backing us and joining our discord. That's all for this update, but here's a little peek at what's happening over on Patreon. 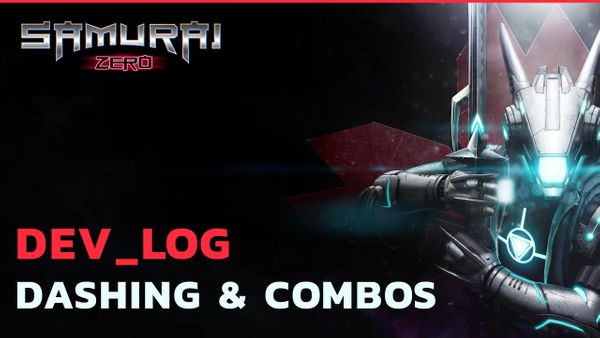 First, lets talk about polish. In previous episodes I talked about Samurai Zero's combat system and the light and heavy system. I said in those previous episodes that I would share more progress on those systems once we got more animations, and today that's exactly what we got.

This month's Dev Log is going to be a pretty special one. While we still have tons of work left to do, we wanted to share with you an early look at how Samurai Zero's combat is shaping up...