With the first-ever teaser of Samurai Zero launched and our gameplay trailer coming soon, let’s journey back to the beginning for a quick recap. Who better to remind us of Samurai Zero’s origin than its Creative Director, Marlowe ‘Ethos’ Crawford.

The development began under the name Project LEAP. Why the name change?

Typically, developers assign internal code words to represent a game until its official title is given. Often the public isn’t made aware of the dev name to prevent confusion until a more permanent name is defined. After word got out that I was starting to develop a game, it became obvious that we needed release a placeholder name while I worked through the details of the game with my team. Why was Project LEAP chosen?  It felt like the core team was really taking a Leap of Faith into something that was new, so it just felt right to name it LEAP because of that. Of course, this past month when we revealed the game, Project LEAP was officially titled Samurai Zero, which I am personally proud to have selected.  (Read on to learn how Samurai Zero became the new name.)

Fans are curious about is the huge change in direction from 2D to 3D. Originally when you showed the prototype of Project LEAP, it was a 2D pixel art game. What factors played into the decision to go full 3D for Samurai Zero?

That’s actually a legitimate question and the answer is multi-dimensional. Bottomline, this was my first game development project and I felt it would be somehow easier for me to make a 2D game (compared to a 3D version). Of course, I’m not saying that 2D games are easy to develop no, far from it. Honestly, it was naive assumption that I made back then. Besides, the idea to go 3D was like a pipedream - something that would be awesome to explore, perhaps for a second game. However, as time went on and the team’s knowledge grew, and we began to attract more and more talent, the question of 3D came to the forefront.

As a team, we began to wonder whether 2D side-scrolling was the best approach for the clearer vision we now had for the game. That question coupled with the  games that I was playing at time, led me to seriously question our original approach. Then, when I visited the Epic Games Studio a couple years back, I couldn’t shake the feeling that 3D was better for us. The people at Epic Games were very supportive of my dream to make this game and even offered to help teach me the high level of building a 3D game and of course, how it could be done within their engine, Unreal Engine 4.

That sealed the deal. Over a couple of months of trial and error, we eventually got to a level that made us 3D-proud and we haven’t looked back since.

Digging further into Art and 3D, originally Samurai Zero looked much different - not just in the switch from 2D to 3D, but the overall feel as well. You could say it was pushing more of an anime-cyberpunk aesthetic during the prototype days. After the game went 3D, the game is in more of a science-fantasy realm. Was that a direct result of moving to 3D or some other factor?

Honestly it was a little bit of both. Going 3D was like getting a brand new canvas. Since we had to redo a lot of assets, we needed to recommit to the anime-stylized look of the prototype or try something fresh. For me, this was a very tough question – making the call to change the art style all together was a huge undertaking creatively and financially.

Changing art would require us to recreate the world in a new image and create entirely new characters with rules of how this new world would function. We went for it. You can definitely still see some inspiration from the LEAP prototype in the design and overall attitude of Samurai Zero, but what I feel was the biggest change was our focus.

Before the leap to 3D, project LEAP felt like the team was trying to find something to latch onto and make work. Early on, trying to establish a cohesive art style and theme was a big challenge. Then a couple years back, I was just searching images for inspiration and came across a Samurai in a forest. It looked like he was traveling through this mysterious forest, prepared to fight another character on the path ahead.

This image really resonated with me.  I was inspired, spending 2 weeks alone and isolated, rewriting our game design document with this idea in my head: What if we created a game that combined sci-fi cyberpunk aesthetics with Feudal Japan. The result, Samurai Zero.

The Fear of Change

Wow! It must have been challenging, taking a big leap of faith like that...again. How did everyone take the massive change?

It’s hard to explain what I felt after finishing the game design document. There was a sense of unease and fear that the rest of the team would be as passionate about the change and challenge as I was. But, there was a fire in my gut I couldn’t ignore. I kept reading this game design document and saying to myself, now THIS is a game I would love to play right now! Finally convinced, I first shared the idea first with our lead writer Griffin.

For context, Griffin had joined the team six months prior and had already written a large amount of the basic world building for project LEAP, as well as characterization for most of the cast. Now imagine if you will, your friend ambushes you out of nowhere throws a 30-page redesign proposal at you and then tells you all the writing you did might be worthless.

And what was his reaction? I can’t imagine he was too thrilled hearing that.

Haha no, but he did warn me if I changed up the project again, we were going to fight. Luckily for all us, Griffin liked the change in setting. The added fantasy element really allowed him to flex his writing muscles. After plenty of grunting and evil stares at me that week, he gave his approval.  With that, I knew I had a stronger chance to convince everyone else. Before the pitch, I wanted to have something tangible to seal the deal for the new vision. So, I had one of our concept artists reimagine of one of our old characters (Runner) in this new world. The result was Wraith, a really cool character that embodies the new art style. That’s just one small example of how the DNA of LEAP still lives on in Samurai Zero.

Thanks Marlowe for taking the time to talk! 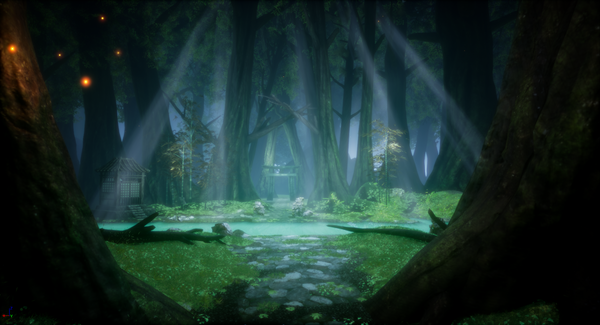 Always Forward. Since our creative journey began, Always Forward has been our singular mantra. From the early prototypes to more recent late night development sessions -- Always Forward - and always with our fans in mind....