Hey, Ethos here, Lead Game Designer on Samurai Zero and today I am excited to introduce you to our second map for Samurai Zero!

This time, we wanted to introduce you to one of Samurai Zero's many cities: the Trickster's Refuge. This neutral port city located in the south east of Edo, is infamous for where dark dealings go down. A true haven for those who appreciate money over the squabbling of Edo's major clans. Run by a syndicate of powerful crime families, Trickster's refuge has been known as a place without limitation.

There's Levels To This Thing

Much like the Burning Cliffs, we wanted to continue the idea of different locations for each round. This idea made the fantasy of fighting within a skyscraper very alluring. So we created 5 different sub levels to Tower, each with its own identity and theme. We really wanted Tower to represent not only a leap in graphics, but also environmental storytelling.

If you look close enough, you will find that Tower tells the story of one of the major crime families of Trickster's Refuge: The Zerikoi. You start on the lobby of the Zerikoi's main office and as you progress higher and higher, you will discover where they eat, sleep, train and make deals. Their family crest is often seen in these areas as well as pieces of art and other trinkets that dive deeper into the family.

For this map, we wanted to create something that still had a good amount of verticality, but also supported increased player counts. With our addition of some 3v3 modes, we designed Tower's different levels to create different tension points at the round start. Some rounds start very straight forward as you stare your enemy right in their eyes. Other times, you start and see nobody at all. These mix ups and the layouts of these levels will create new ways for players to strategize their approach individually or with their team.

We are also excited to share our initial implementation of some environmental interactions via destruction. On certain levels, walls and other smaller objects can be destroyed. Not only can some of this be used tactically, but also adds to the environment and makes it feel less static and more alive.

Look to the stars

If you have a match that reaches round 5, we hope you will enjoy the visual reward of fighting on top of this massive skyscraper. Its by far my favorite place in Edo so far and I think it sets the tone moving forward with all of our maps. Our levels are meant to challenge and surprise you. There is a little bit here for everyone from environmental storytelling, to gameplay opportunities. Compared to Lava, there is an immediate difference in technical capability and direction that we have brought to this level and to the game.

This level was a challenge for us to bring together and I hope everyone will appreciate the results. This has excited us not only for our new maps we are developing, but also revisiting old ones and giving them the justice they deserve.

Thanks for taking a look at Tower and supporting Samurai Zero! I am excited to see everybody's reaction! 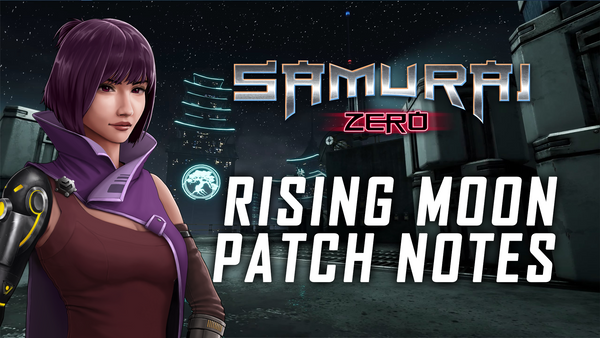 Our first INSANE update for Samurai Zero is now underway! It’s important to start off by saying that this is not the final changes for any one thing, so