Hey everyone, welcome to our first Dev Log for Samurai Zero. Today, we wanted to focus on the first core aspect of our game, Movement, with one of our fastest Samurai, Ryder.

Of course, as with all these types of Dev Logs, everything you are about to see is a early work in progress, so just keep that in mind.

For us, Movement in Samurai Zero is ensuring players always feel in control. So to reach this goal, we developed an omni-directional movement system allowing you to move and rotate at any time and any degree with a dynamic locomotion animation system and a responsive drawn back camera.

This level of freedom is perfect for a game that focuses on melee styled combat and always prioritizes making the character look at where the player is looking, even during movement. We also decided to not include any sort of hard camera lock targeting system because we realized early on it limits on player's game awareness, especially when dealing with more than one enemy at one time.

So, Every Samurai in the game has 3 sets of movement speeds: Walking, Running and Sprinting.

Walking is of course the slowest and more for when you just wanna size up your opponent.

Running is anytime you input any sort of directional movement. This is usually the default movement speed players will be using while in combat.

and finally, Sprinting is the fastest mode of movement, allowing you to reach locations quickly. However, unlike running, while sprinting, you can not strafe left and right due to the boost of momentum.

We are still messing around with the speed values for these three movement modes as well as how to balance them either universally or separately for every Samurai that will join the roster.

Being more of a fast paced game, we felt it necessary to include a nice jumping system. During development, we experimented with multiple types of jumps, trying to find which one best fit Samurai Zero.

Starting with the tried and true double jump, a more floatly glide jump and finally, we even experimented with the usage of a strafe jump. Each of these jumps were fun and responsive while having their own distinct advantages and disadvantages for traversal and combat.

So, when it came time to decide which one to go with however, we decided....why not all 3.

Yup, after separating our jump system into components, players will be able to customize which jump they want to use. So weather you like the feeling of a double jump, the evasiveness of the strafe jump or reaching higher places with the glide jump, Samurai Zeros got you.

Oh and one final mechanic. For the longest time I have always been the fan of mobility in games especially one of my favorites, the 2008 cult classic Mirror's Edge. That game left a huge impression on me as well as the evolution of FPS movement in Respawn's Titanfall games.

I always wanted to give Samurai the ability to feel as free as I felt in those games.

So, after a lot of iterating and revisions, we finally taught Samurai how to wall run.

Designed with traversal in mind, Wall running opens up a whole new dimension when it comes to us designing maps and even combat. We decided once implemented correctly, wall running would be a core movement function for players and not some limited after thought for a small section of the map, so at least in this first iteration, we have enabled wall running to work on almost any surface of a level.

In furthering our implementation of wall running, we designed this system to work in tandem with our jumping system, further allowing players to chain running, jumping and wall running together.  This version of wall running is still pretty early on as you can see, but so far as a proof of concept, I'm pretty excited about it.

I think that pretty much covers it for this first look. We have so much more to share with you including combat mechanics, additional gameplay features and new Samurai, so subscribe and follow us on twitter.

This video wouldn't have been possible without the support of our recently launched Patreon, so if you would like to support the development of Samurai Zero and see an even more in depth look of what you have seen here and even not seen yet, consider backing us and joining our discord.

Expect more dev content like this every month here on the blog as well as Ethos' channel for the video versions.

Thanks for watching and remember, always forward.

Support us on Patreon: 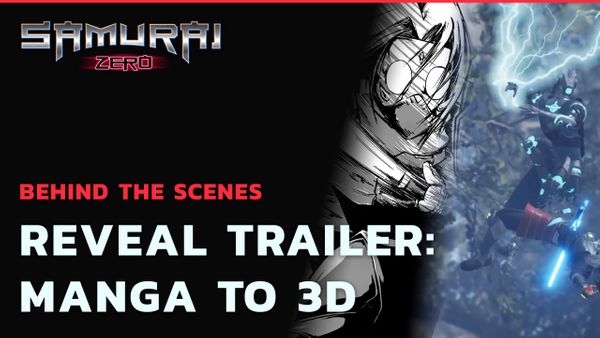 Watch how we used a manga to help form our reveal trailer in this month's behind the scenes video!

Catch up where the reveal trailer left off with the next Chronicle, The Fox and the Hare.